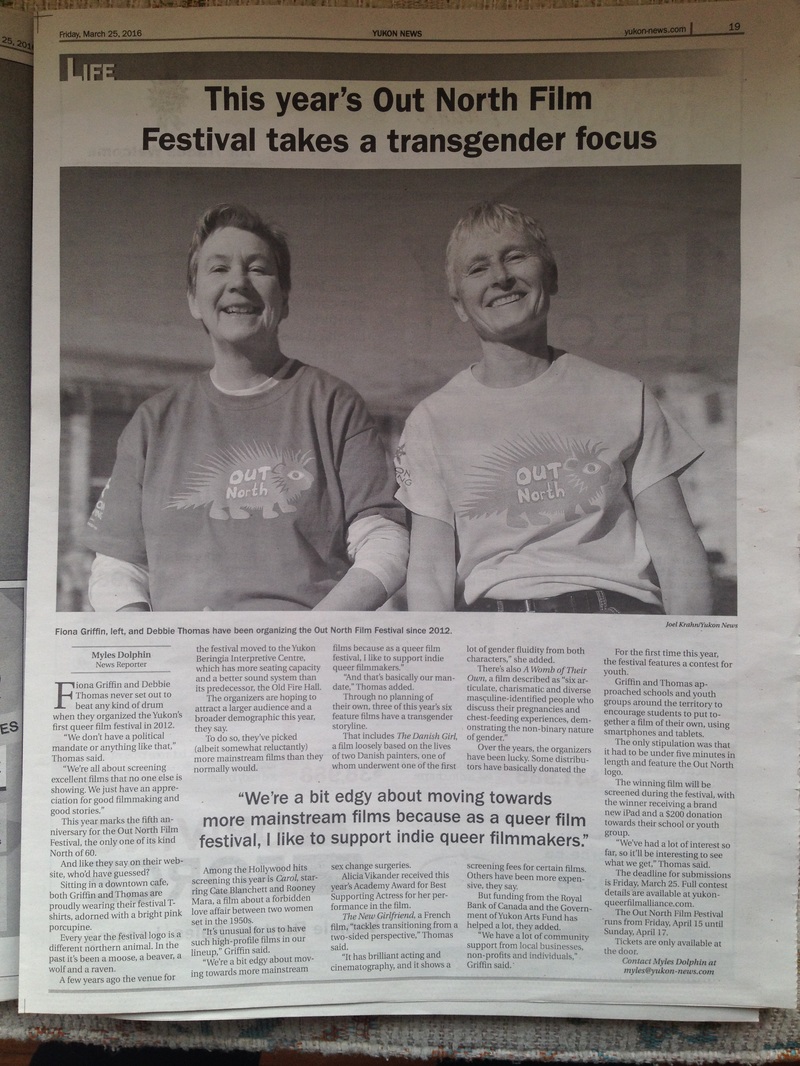 Thanks to Yukon Film Society for letting us use the Jenni House studio at Shipyards Park and some of their equipment for this event! They will also be screening films, starting at midnight.

Thanks also to Doug Drake for sharing the space with us for 45 minutes or so. Doug (who has been our awesome projectionist for the last several YQFA events) is doing an installation piece as part of Nuit Blanche. Can't wait to see what it is!

We'll be showing four films from this year's OUT North shorts program, plus a favourite from a couple of years ago.

Films start at 10 pm and run for roughly 45'. Here's what the screening order will be:

Flamingo Pride (Tomer Eshed, director, 2011, Germany, 6')
An animated comedy about a lonely heterosexual Flamingo looking for love in a sea of pink.

All God’s Creatures (Brendon McDonall, director, Australia, 2012, 19')
Asher likes fishing and swearing. Brother Charlie likes tea parties and crafts. Their father has walked out of their lives and their relationship undergoes a test of almost mythic proportions when Asher’s confusion and anger boils over into a mindless act of cruelty against an eel.

Desiree Akhavan had this to say about the jurors' choice:

"What makes a film queer? I always defined queer film as ones that humanizes queer characters. The incredible team that runs the Queer Palm told me their definition was “a story of people pushing against societal norms.” Either way, I struggled to find these qualities in some of the films under consideration for the queer palm. None of them felt gay enough.

In fact, the jury would like to give a special mention to THE LOBSTER. It doesn’t include a gay narrative, but with the dearth of overtly gay films at the festival, this film stood out as an allegory, poking fun at the absurd societal rules and regulations around mating.

Is it Cannes reluctance to program films with queer content, or do the leading directors in cinema shy away from telling queer stories because it would banish their work to the ghetto of the “gay film” niche?  I think both are a bit true and for that reason it’s really important that an award like the queer palm exists to call attention to the films that broaden the definition of queer cinema and continue the legacy of the genre.

Last year, Xaver Dolan said the existence of the queer palm disgusts him. With all due respect, I have to disagree.  I don’t see awards like these as dividing, but publicizing and calling attention to the existence of queer cinema.  Queer cinema matters.  It matters because through queer cinema I met my first gay friends and I received the only source of comfort I could find when I was coming out and trying to figure out what being gay meant for the rest of my life.  And I don’t think I’m alone in this. It’s important to say fuck you to stereotypes. If the label of “gay filmmaker” makes you cringe, devote yourself to redefining the term by making good gay films.

Most would agree that to be queer is to battle labels. We defy categorization. “labels are for cans” is what it said in the pin I got at my school’s gay straight alliance. Tonight, I’d like to speak in defense of labels.

Every time a good film step up to the label of queer, the perception of queer cinema transforms just a bit. Stranger by the Lake, Weekend, Pride- These are films that changed the face of queer cinema because they weren’t scared of the gay film ghetto. The film we’ve chosen to award is more than a movie, it’s a moment in history.  The first time a love story between two women was treated with the respect and significance of any other mainstream cinematic romance.  For its heartbreaking performances, stunning mise-en-scene, and overall mastery of craft we are proud to award CAROL with the Queer Palm."
May 13, 2015
﻿Something for Cate
Blanchett fans to look forward to...﻿